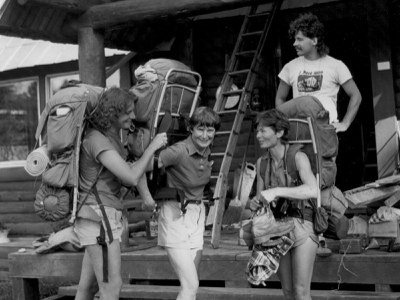 In 1970, I first began to envision and explore the Pacific Northwest Trail (PNT).  Thirty-nine years later Congress added it to the National Trails System as a “national scenic trail.”  That meant three things.  First, the congressional route is described in the Pacific Northwest Trail Association’s 400-page, 2001 guidebook (including a blueprint for nearby improvements).  Second, the PNT was designed, as much as possible, for wilderness adventure.  And, third, the trail today is a product of its almost fifty years of vibrant history.

In 1974, I described the essence of the PNT in Backpacker Magazine.  I wrote, “Imagine taking a hike from the Continental Divide in Glacier National Park across the Northwest’s mountains, deserts, and river valleys to Olympic National Park’s Pacific beach.  From well above treeline to the luxuriant forests, from one inland wilderness area to another, to the most mysterious of all wildernesses – the sea – will someday stretch a dream trail a passionate walker’s trail.”

Forty-two years ago I didn’t stop there.  I doubled down on the PNT’s high-for-the-views character.  “It will be as much as possible a wilderness trail with relatively difficult access, relatively few signs and shelters, and relatively great attention to given in planning to its walkers’ potential wilderness experience.  It will be a trail of superb … adventurous, frontier walking.”

My 1974 PNT Manifesto is more relevant than ever now because the trail’s agency partner, the US Forest Service, has convened an Advisory Committee to create a management plan, choose priorities, and select a route.  They will meet next in Port Townsend, WA from May 4 to May 5.  Few people know of the committee’s existence.  The twenty-seven members include very few hikers.  If you care about the future of the PNT, please snail mail Matt McGrath, Pacific Northwest National Scenic Trail Program Manager, 2930 Wetmore Avenue, Suite 3A, Everett, Washington  98201, or email mtmcgrath@fs.fed.us .

What can you do to affect the PNT’s next fifty years?  Please ask the Forest Service to manage our trail in keeping with our backcountry identity.  Hike as much of the PNT as you can.  Tell your friends.  Support the Pacific Northwest Trail Association.  Read my memoir, Pathfinder: Blazing A New Wilderness Trail In The Pacific Northwest.  The PNT began in 1970 as my vision.  Now is the time to make it your own dream.