The proposed path of the Sea-to-Sea Route would connect, 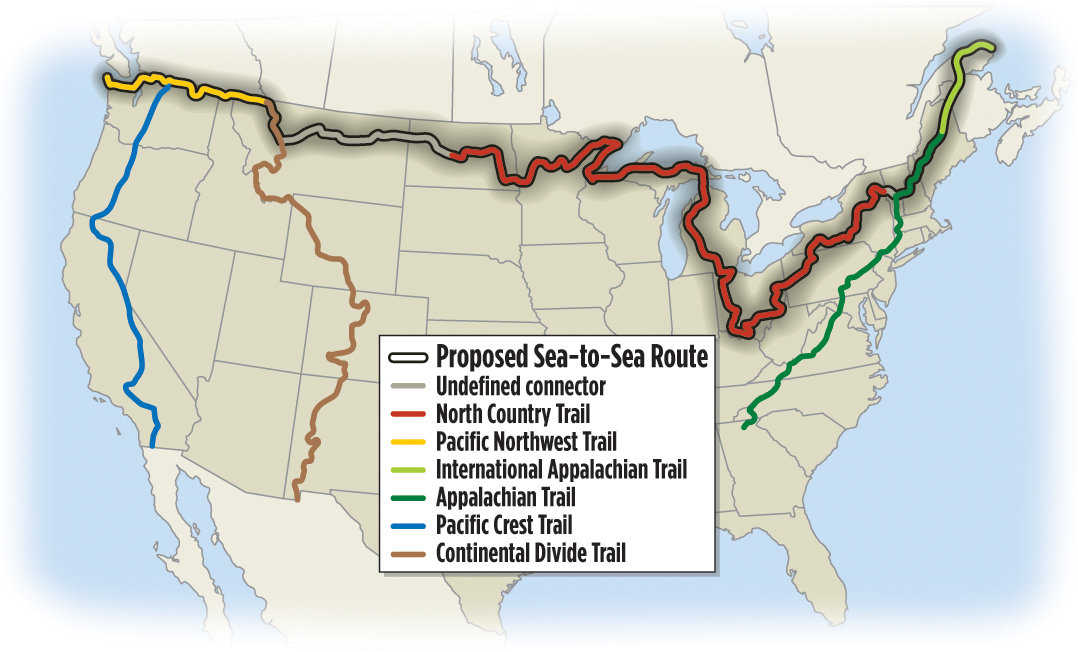 Article from December, 2011, about the Sea-to-Sea Route.

In 1968 Congress created the National Trails System.  Of its three categories of national trails, the "national scenic trail" category currently includes 11 long pathways.  Unfortunately the National Trails System still lacks the cohesion of a genuine "system."  So in 1996 Ron Strickland proposed the creation of an east-west route to link four of the longest national scenic trail.  This Sea-to-Sea Route (C2C) would use the PNT, CDT, NCT, AT, and IAT to create a transcontinental passage from the Pacific Ocean to the Atlantic Ocean.

As of now, C2C is a concept route, not a club or a government agency. There are no employees and few volunteers.  Instead C2C challenges us to create and explore a true, unified National Trails System.  Europeans already have such a skein of routes to unify their continent.  [http://www.era-ewv-ferp.com/frontpage/] Isn’t it time that we in North America put it all together for this and future generations of backpackers?

This proposed transcontinental trail in no way diminishes the luster of its components. The whole is greater than the sum of the parts.  Each leg remains as a fabulous, independent entity.

Our goal at Scenic Trails Research is to create new opportunities for all walkers through C2C's enhancement of the National Trails System grid.

The Sea-to-Sea (C2C) Route would begin at Cape Alava on the wilderness coast of the Olympic Peninsula.  It would follow the Pacific Northwest National Scenic Trail (PNT) east 1200 miles to Glacier National Park.

A Sea-to-Sea Route backpacker would continue south on the Continental Divide Trail (CDT) to and beyond the Bob Marshall Wilderness to the Benchmark campground.

The Sea-to-Sea Route will follow the North Country National Scenic Trail (NCT) east 4700 miles to the Appalachian Trail in Vermont.

A 30-mile gap exists  east from Lake Champlain to the Appalachian Trail.  [The Middlebury Area Land Trust is working on this problem.]

The Sea-to-Sea Route will follow the Appalachian National Scenic Trail (AT) northeast to Mt. Katahdin in Maine.

The easternmost C2C segment will follow the International Appalachian Trail (IAT) northeast to Cape Gaspe on the Atlantic Ocean.

Ron and Andrew Skurka celebrate Andrew’s completion of the route (2005). Read about the background of Andrew's extraordinary C2C adventure in "Pass It On" (pages  113  to 124 of Pathfinder ). 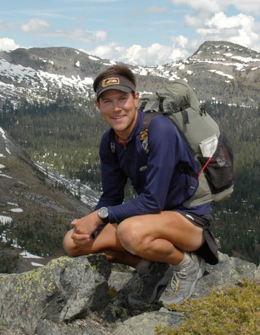 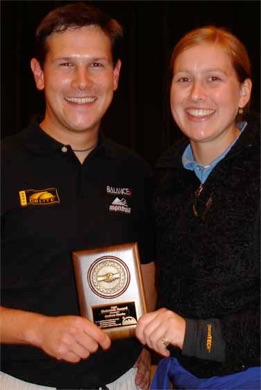 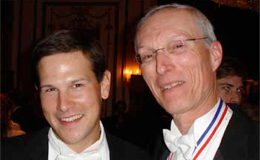 Ron and Andrew at the Explorer’s Club Annual Dinner, where Andrew is honored for his thru-hike (2006) 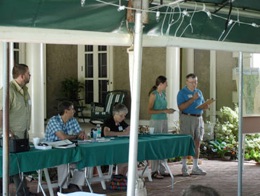 Tom Gilbert (far right), Park Service manager of the North Country Trail, addresses a meeting to encourage the expansion of the Trail as part of the Sea-to-Sea Route (2007)

A Brief History of the Sea-to-Sea Route

Final development of the Sea-To-Sea Route will not supplant its constituent parts but enhance them as parts of a transcontinental vision.

This route has history, scenery, and adventure.  It mostly uses long distance trails that have already received public recognition.  The Sea-to-Sea Route is the best way to link the three "Triple Crown" trails into a true national system.

The 200th anniversary of Lewis and Clark's epic journey reminded us that exploration is an essential part of the human endeavor.  C2C distills that spirit of adventure for 21st century walkers.

In the 19th century, ordinary people talked of "lighting out for the territory."  Millions sought their dreams over the horizon in the forests and on the prairies.  From settled precincts to the wildest mountains, they made their way on foot and on horseback.  Now, generations later, that excitement can be rediscovered on the Sea-To-Sea Route.  Whether you have a day or many months, C2C's opportunities await you.  Experience the simple joys of putting one foot in front of the other.  Slow down.  Open your eyes to the wonders of the North American continent.  Discover hidden strengths within yourself.  And know at the end of the day that you have accomplished something special.  There is nothing chic or trendy about the eternal verities out there under the sky.  But that's why decades from now people will still treasure a weekend or a fortnight on the Sea-To-Sea Route.